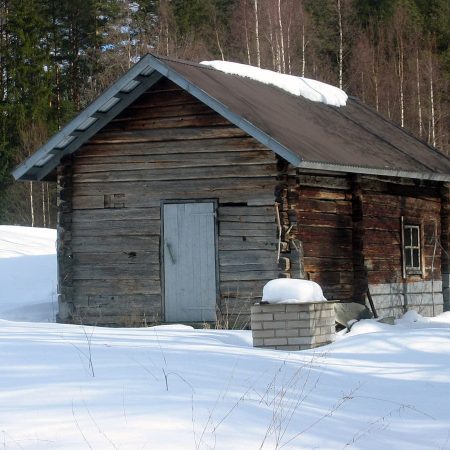 The word sauna is an ancient Finnish word referring to the traditional Finnish bath and to a bathhouse itself. In other Baltic-Finnic languages, sauna does not necessarily mean a building or space for bathing, it can also mean a small cabin or cottage, such as a cabin for a fisherman. The oldest known saunas were pits dug in an enbankment and primarily used as dwellings in winter. The sauna featured a firepit where stones were heated to a high temperature. Water was then thrown over the hot stones to produce steam and to give a sensation of increased heat. The steam would raise the apparent temperature to the point where the occupants could take off their clothes. Over time the sauna transitioned to a different form.

Saunas became single room structures built above ground with wooden logs. The first Finnish saunas, in this new form, are today called savusaunas, or ‘smoke saunas’. The ‘smoke sauna’ contained a pile of rocks, called kiuas, that were heated by burning large amounts of wood for 6 to 8 hours, and then letting the smoke out before enjoying the lˆyly, or sauna heat. This room did not have a chimney but it did have a small air vent in the back wall. A properly heated “savusauna” gives heat up to 12 hours. The name sauna is thought to be a derivative of the word savuna, literally “in smoke”. The savusauna is still used in Finland by some traditionalists, but usually only on special occasions such as Christmas, New Years, Easter, and juhannus (Midsummer).

During the Industrial Revolution, the sauna evolved to use a metal woodstove, or kiuas, with a chimney. The lˆyly (steam vapor) was created by splashing water on the heated rocks. The Finns also used a bundle of birch twigs with fresh leaves, to gently slap the skin and create further stimulation of the pores and cells. Purists still use the birch twigs with leaves today; check out our Birch Sauna Whisks! The Finns saw the sauna as a place to cleanse the mind, rejuvenate and refresh the spirit, and prepare the dead for burial. The sauna was then, and still is an important part of daily life where families bathe together in the home sauna. In addition, because the sauna was often the cleanest structure and had water readily available, Finnish women also gave birth in the sauna.

Although modern sauna culture is more influenced by the Finnish sauna, one should know that the sauna developed around the same time both in Scandinavian and Baltic regions, with both areas sharing similiar meaning and importance of sauna in daily life. A revered sauna culture thrives in both regions to this day. When the Finns migrated to other areas of the world they brought their sauna designs and traditions with them, introducing other cultures to the enjoyment and health benefits of sauna. The Finns are thought to have brought the sauna to America around 1638, whenever they first settled in current day Deleware.

Modern living along with the development of electricity changed the sauna experience again. Saunas became more accessible in the U.S. after the electric sauna stove was developed in the 1950s. After 360 years in this country, the sauna has become an established tradition for many Americans as it has been for the Finns.